PEOPLE OF THE MOUNTAINS – IGOROTS OF THE CORDILLERA

Three weeks in the Cordilleras of Luzon and I feel like I have only scratched the surface of experiencing the rich cultures that make up the Igorot people. This is a common trend I have experienced while working on the Katutubong Filipino Project and one reason I hope to extended the project longer term, perhaps for another three years. More time is needed. This is especially true when trying to tell the story of the Igorot people who live in six different provinces with over 20 tribes all speaking different languages, practicing different rituals, and have different beliefs and cultures. Visiting the Cordilleras was like stepping into another country for me, a drastic change in geography and people’s general positive outlook and attitude toward their own way of life. Although I wasn’t able to visit all six provinces that make up the Cordilleras, this trip did provide as an excellent introduction to the area and whetted my appetite to learn and experience more on a return trip.

From a historical standpoint, the people of the Cordilleras were never a united people and still to this day there are peace pacts in place to keep order among many of the tribes. The term Igorot is an old Tagalog word meaning “people from the mountains” and is a general term used to include all of the mountain tribes from the Cordilleras. The Spanish adopted this term, but it was generally used in a negative manner referring to savages and backward people of the mountains. However, the Spanish themselves were never able to fully penetrate the Cordilleras during their 300 year colonial period in the Philippines and thus had very little influence on the Igorot people and their way of life. Part of this was likely due to the rugged terrain of the area but also because of the fierce nature of the people, who would not surrender easily to outsiders. It wasn’t until the early 1900’s when the American Episcopal church came into some areas of the Cordilleras and people started to convert to Christianity and get formal education.

Today, the term Igorot is often debated among the people of the Cordilleras as to what the politically correct use should be. Many groups now proudly proclaim themselves as Igorots while other tribes still prefer to be called by their more specific tribal names. After three weeks in the area and hearing time and time again people referring to themselves as Igorots I never got the feeling that it is a negative term to use. I refer to the Igorot people in the most honorable and respectful manner. Portraits of Lakay Lausan a Tingguian man and Lakay Wa-aw a Kankanaey man. Lakay Lausan is one of the elders in a small village we visited in Abra province. Lakay Wa-aw is one of the older Kankanaey men still around and at 92 he has nine children and over 30 grandchildren. The two water buffalo horns above him are from two of his children’s weddings. His necklace is centuries old and has been passed down from generation to generation. It is made of wild bore tusks and crocodile teeth from the Visayas.

One of the unique aspects of life in the Cordilleras is that the Igorot people are essentially a self-contained society running all aspects of life from businesses to politics. Unlike many of the other tribes or indigenous communities in the country who have been extremely marginalized and pushed to small pieces of their original land, the Igorot people, generally have maintained much of their land. There are always ongoing issues with regards to ancestral domain, and from what I have been told the process to actually get declared ancestral domain is almost unimaginable. However, the Igorot people have managed to maintain much of their land excluding outsiders or lowlanders from coming in and setting up shop. This has essentially allowed all development to generate from the people themselves.

Seeing life in Sagada and other city centers in the Cordilleras being completely run and shaped by locals was really very inspiring to see. I can’t think of another place off hand where this same type of system is in place. It shouldn’t be a surprise though seeing that the Igorot people were able to keep the Spanish away for over 300 years. In more recent times, they were also able to rise up and keep President Marcos from building a huge dam on the Chico River in the late 70’s and early 80’s. If the damn had been built it would have displaced a large number of communities and their rice fields. The people were able to join forces with the communist rebels and stop the damn from being built. Today, there is a plan to put a number of windmills around Sagada and the people are highly skeptical of the plan and the feasibility behind it. I don’t think the plans will push through because the people will not allow it too, one way or the other. It’s cases like this that show the true resolve of the people and how maintaining what is theirs is of vital importance to them.

Away from the city centers life is a little more slow pace with a big portion of time spent farming, preparing food, and tending to the house and family. I was fortunate enough to visit a number of different communities on this trip including one that took two days of rugged hiking to reach. The hike through the mountains was one of the hardest hikes I have done in recent memory, but was worth every step being able to experience mountain life and a community still very much isolated in terms of distance.

Much of the culture and life in the Cordilleras revolves around rice. From planting to harvest each period represents a time that is honored and sacred in its own way. My trip happened to be during a growing period and I was not able to see a lot of people planting or harvesting rice. There is always some activity though as weeding, keeping birds away, drying harvested rice and other tasks are ongoing. Rice is the staple crop for the Igorots and they have built some of the biggest and most advance rice terraces in the world. Traveling through the Cordilleras you will see some amazing terraces that have been around for millennium. To this day many of the tribes still practice thanksgiving rituals before planting and at harvest time. The Begnas ritual for the Kankanaey and the Bumayah for the Ifugao people are two examples of this. These rituals are usually put together very fast and are never scheduled, so witnessing one takes some patience and timing. Perhaps on my next visit I will be able to witness one.

Aside from rice cultivation there are numerous agricultural products grown in the Cordilleras because of the altitude and cool temperature. Coffee is a popular product and most households drink a good amount of the stuff. It wasn’t uncommon to have about 10 cups of coffee a day, but it sure beats the instant coffee I usually drink when out in the field. Vegetables and other produce are grown in abundance and many of them are brought to the lowlands to be sold. Likewise, the forest and mountains themselves are also an important resource for the Igorot people. Hunting and fishing are important parts of culture in the Cordilleras and is often learned at at early age. During my long trek into the mountains I was able to experience a little of this life myself. Two Tingguian men. Marlon is an expert fisherman and La-aw is a mountain man with a lifetime of hunting experience.

My visit happened to fall during summer time which is one of the wedding seasons in the Cordilleras. Wedding season really means there are a lot of weddings to attend. I thought it may be hard to find one to document, but the day I arrived there was one being prepared for that I was able to visit. The following weekend there were two more. Most of the traditional wedding celebrations in the Cordilleras now integrate a Christian church ceremony as well as the tribal ceremony and rituals. Most traditional weddings last for two to three days and everyone in the community is invited to attend and eat. I have never seen so many pigs killed before all at one time in preparation for an event.

In the village of Buscalan, Kalinga there are still remnants of the one thousand year old ancient art of tattooing (batek) once commonly practiced in Kalinga. Men traditionally got tattooed as a rite of being a warrior or taking a head which was fairly common place up until the time of about WWII. Thus, it is difficult to find men who still have tattoos and younger men don’t especially feel right about getting one to show their identity (because of the meaning it carries). Women on the other hand would get tattoos to beautify themselves, but more so to signify acceptance and the different stages of their life. There are a number of research articles online describing in-depth the meaning of these tattoos and the purposes for getting them if you are interested in learning more. Today, there are still numerous older women in Buscalan that can be found with the tattoos.

The art is slowly fading away, but Fang-od (Whang Od), the last remaining traditional Kalinga tattoo artist has helped bring a lot of attention back to the craft. At 93 years old Fang-od is a lively and very entertaining person who has the energy level of about a 50 year old. In 2010 she was featured on the Discovery Channel television show “Tattoo Hunter” which helped set the stage for other shows and documentaries all bringing a lot of recognition to the art. This sparked a huge amount of interest and today people from all over the Philippines and the world come to visit her and get a tattoo. Fang-od does not have any children, but one of her nieces is now starting to learn the craft. It’s hard to know what will happen after Fang-od passes on, but hopefully the traditional tattooing will somehow continue. Two tattooed women from Buscalan, Kalinga. Ghan-nao, who is Fang-od’s younger sister is on the left and has one of the more elaborate tattoos that can be seen in the village.

My short visit to the Cordilleras was filled with memorable moments highlighted by the people I was able to meet along the way. My guides became friends and the communities where I stayed became familiar places. Although three weeks is not nearly enough time to see six provinces and experience the depth of cultures in the Cordilleras it was certainly one of my more memorable trips. Part of that was because I had new experiences with hiking in the mountains and pushed myself to physical extremes. Another part was because the people were so welcoming and open to sharing their ideas and thoughts with me. A lot of my time was spent waiting and hanging out in different communities, something that I have become very comfortable and patient with over the course of doing this project. I am someone who really likes to be on the move and get things done and it’s always refreshing to spend some time in a place where I can reverse that a little. I am hopeful that the Katutubong Filipino Project will be able to continue as I will be focusing now on finding more funding sources to extend this well received project. For those of you who follow the progress of the project I will be doing an update soon about what’s next and future happens that are currently in the works. Stayed tuned. 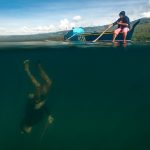